Welcome back to Halsadiya Beauty Blog 💃🏾

It’s over 3 weeks since my previous blog post. I’ve been quite occupied and trying to figure out stuffs. I missed you all 💗.

I’ve been skeptical bout publishing this post, but here I am 😁. The past few weeks, I’ve struggled with severe neck and back pains than I’ve ever had in my entire life. Why?, Keep reading 💃🏾

Scoliosis is an abnormal curvature of the spine that occurs most often during the growth spurt just before puberty. Doctors are still yet to identify the main causes of scoliosis. ” The truth is we aren’t 100% sure what causes Scoliosis, and about 80% of cases are classified as idiopathic. This literally means without known cause – Dr. Paul Irvine “. There is also no confirmed genetic cause of scoliosis.

Adult scoliosis is typically a continuation of adolescent scoliosis, which is commonly diagnosed during teenage years. Typically, these adolescent patients are diagnosed with Idiopathic Adolescent Scoliosis (IAP). There are cases where adults can develop scoliosis, however, the vast majority have had scoliosis for much of their life.

Most cases of scoliosis are mild, but some children develop spine deformities that continue to get more severe as they grow. Severe scoliosis can be disabling. An especially severe spinal curve can reduce the amount of space within the chest, making it difficult for the lungs to function properly.

Signs and symptoms of scoliosis may include:

– One shoulder blade that appears more prominent than the other

– One hip higher than the other

If a scoliosis curve gets worse, the spine will also rotate or twist, in addition to curving side to side. This causes the ribs on one side of the body to stick out farther than on the other side.

I was 13 years old when I was diagnosed with scoliosis. I was young and didn’t understand much of what it meant. Apparently, this became visible when I was 9 years, I never thought it was something serious and expected it to go away. Four years later, I bent over to pick up stuffs and my mum’s friend noticed my back, she said I need to see an orthopedist. For the first time, someone didn’t agree I had a bad posture but needed medical help.

I was pretty scared, I got an appointment with the doctor. After briefing and minor test, I was instructed to take off my clothes. Lol, the doctor was the first man that ever saw me naked. X-ray and neurological tests were also performed on me, and I was diagnosed with scoliosis. Fortunately, my curvature was not big enough to require surgery urgently, but I did have to wear braces at school. The doctor assured me if I used my drugs and wore my braces regularly, I won’t need a surgery. I still remember the shame I felt on the first day when I wore braces to school, even after the first day- almost the whole school made fun of me. My school shirt was white and my braces were quite obvious, “Are u wearing a school bag under your white?”, “What’s that thing under your white?” were few questions I got teased, taunted, mocked and harassed with.

I was young and still trying to understand living with scoliosis that I had no idea how to explain it to my classmates let alone the entire school. At the time it was ok, we were kids, but this was a pattern I would carry on with me into my adulthood.

The worst part about having scoliosis isn’t the physical pain, it is the emotional pain. It is the mental and psychological effects of growing up with a visible deformity.

I was filled with thoughts. I wondered why it took four years for someone to notice I had scoliosis, maybe if it was noticed earlier, it would have been corrected.

I became extra self conscious- how I walk, eat, sit, stand, and even talk. I have to keep adjusting my shoulders till it’s equal, I have to swing my hips to the opposite side while walking so I won’t have people making fun of why one hip is more curvy, I try as much not to bend my back for whatsoever reason, I have to fake a correct posture for the Camera, I have to wear loose clothing so my diagnosis won’t be obvious, I have to endure pain when I stand or sit too much so as to look strong, I have to use couple of drugs everyday of my life, I try not to complain too much when I’m told to do things I can’t or shouldn’t do that affect my back, I have to appear strong so people won’t know how weak my bones are.

I saw my body as a mess, I felt weak and broken. I felt pain- not only physical but mental pain. I struggled with feeling not “good enough” or “pretty enough.” and I still struggle with that sometimes. I still walk around every day trying my best to blend in. I am incredibly self-conscious. I often avoid eye contact. I try not to — it is something I work on everyday — but that is the reality of my life with scoliosis.

Most people with scoliosis have a mild form of the disorder, scoliosis may sometimes cause complications, including:

– Lung and heart damage. In severe scoliosis, the rib cage may press against the lungs and heart, making it more difficult to breathe and harder for the heart to pump.

– Back problems. Adults who had scoliosis as children are more likely to have chronic back pain than are people in the general population.

– Appearance. As scoliosis worsens, it can cause more noticeable changes — including unlevel shoulders, prominent ribs, uneven hips, and a shift of the waist and trunk to the side. Individuals with scoliosis often become self-conscious about their appearance.

Generally, the curves in a spine with scoliosis can’t be reversed without surgery. The goal of wearing a brace is to stop the curves from getting bigger, not to cure scoliosis.

A thoracic S-shaped curved spine could only be corrected one of two ways: I would have to wear a back brace and/or I would require surgery. Both options seemed horrifying because they were. The mention of medical surgery is terrifying, at best, and a back brace? That was disconcerting too. However, since the operation was seen as a “last resort,” my mother and I chose the obvious route.

Wearing the brace took some getting used to. For starter’s it’s pretty big, so it stretched out a lot of my clothes. Secondly, it’s not the most comfortable thing in the world to spend 20 hours a day in brace that covers you from your shoulders to half your belly, so even relaxing things like sitting, walking, dancing, running and watching TV became painful to do.

After a year with the braces and drugs, my doctor suggested I rather get a surgery. He explained the procedure of the surgery which was too horrific for me to go through. The idea of a doctor opening up my back to reach my spinal cord, inserting screws and metal rods, sealing it up for couple of hours or days and opening them again after months or years to take the metal rods and screw out or to lengthen them wasn’t something my mother and I was ready for.

Complications of spinal surgery may include bleeding, infection, pain or nerve damage. Rarely, the bone fails to heal and another surgery may be needed.

I know someday or perhaps sooner, I will have no option than to go through the surgery. Or maybe a miracle happens and I don’t need either the surgery, braces or drugs.

▪ FEW TIPS I HAVE FOR OTHERS

I came was opportuned to interact with a blogger- Osi Okoye who is also diagnosed with scoliosis. Actually, she inspired me to write about it and I learnt some tips from her which I will be sharing with you all. Irrespective if you have scoliosis or other conditions or struggling with health or weight issues

1. Some are uninformed and intend not to be mean – mean comments will be uttered and brutal questions will be asked. Those people are not worth taking into consideration. Take that as your queue to write them out of your life. And if you have to work with them, focus on whatever else may have started a conflict in the first place. However, know that most people who make remarks about your weird posture or your back are just uninformed. You’d be surprised how many people don’t know what scoliosis is.

2. Don’t focus on those who stare. It’s rude to stare, but unfortunately people still do. Just ignore them.

3. Scoliosis doesn’t define you! Your physical body doesn’t define you! This is something many people struggle with, scoliosis or not. Society today puts a lot of pressure, especially on women, to look their best, to have perfect bodies. The perfect body is the one that allows you to walk, laugh, do the things you love, be with friends. There will always be a little imperfection to correct. If you put all your satisfaction in how you look, you will never be completely happy. But your body it’s just a part of you. It’s not who you are, it does not define your sense of humor, the things you are great at. If someone truly loves you, they’ll love you no matter what your physical issues are. And if they don’t love you because you have scoliosis, or scars, or cystic fibrosis, or for those extra pounds, let them go!

4. Make no mistake: it is still hard. Physically, mentally, and emotionally “life with scoliosis” is still hard. But I keep going. In spite of the pain, I keep moving forward, because I am more than these physical and emotional burden that have been put upon me.

I am more than my diagnosis. You are too.

Haleemah Al-sadiya is a natural hair and skincare blogger living and working in Lagos. She works a 9-5 job whilst building her passion about sharing her natural hair journey, skincare regimen and also her experience in the beauty industry. You can find her: ▪Instagram: @theladylymarh ▪Twitter: @theladylymarh ▪Email: halsadiyabeautyblog@gmail.com View all posts by Haleemah Al-Sadiya

21 thoughts on “LIVING WITH SCOLIOSIS”

This site uses Akismet to reduce spam. Learn how your comment data is processed.

While I’m not here, check me out here 👇 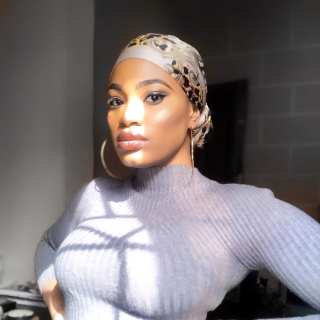 Haleemah Al-sadiya is a natural hair and skincare blogger living and working in Lagos. She works a 9-5 job whilst building her passion about sharing her natural hair journey, skincare regimen and also her experience in the beauty industry. You can find her: ▪Instagram: @theladylymarh ▪Twitter: @theladylymarh ▪Email: halsadiyabeautyblog@gmail.com